You are here: Home / Archives for Projects

It’s just over two weeks since I returned from my 3-day Grand Tour, travelling mainly by train on a round trip which began and ended in Coventry and visited the south west of England and the north east of Scotland. Since then it’s been a busy period – I’ve been abroad for a conference and have quite a lot of work to complete arising from that – but I have spent time reflecting on the Tour (if very little time yet reviewing the photographs that were taken). My thoughts fall into three categories: practicality, photographic and experiential.

I spent a lot of time planning the Tour and believed that it would work well. And in practice everything generally did. With one exception the trains were on time (the Inverness to Aberdeen train was 45 minutes late). The total distance was 1,977 miles which took almost exactly 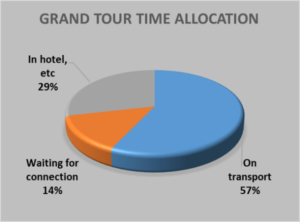 70 hours to cover. Whilst at first glance this appears impressive, it does mean my average speed was only just over 28 mph! The breakdown of the time spent travelling, awaiting connections and other activities is shown in the pie diagram.

I did ponder staying overnight in Kyle of Lochalsh, which would have had the benefit of travelling in daylight for the entirety of the journey to Aberdeen. It would also, of course, have added on a whole day and increased the cost. On balance I would stick with the way I did it; for some reason, I gain more satisfaction from completing the journey in 72 hours than I would if it had taken 96.

One option I considered was, upon arrival in Penzance, to catch the sleeper train to London. This would have got me back to Coventry five hours earlier the next day. But there is only half an hour between the train from Aberdeen arriving and the sleeper departing, which I decided was cutting it a bit fine. Moreover, I’d never visited Penzance and wanted to see a least a little of it before I departed.

The main purpose of the Tour was not photographic. Having said that, I took a lot of photographs – over 700. The approach was very different from my usual one. Normally, my method is very measured; I use a tripod, make use of the camera histogram to help determine exposure and will wait for the right light before I take the picture. On the Tour, pictures were taken from a moving train and any artistic merit they have is due as much to serendipity as to my skill. And without previsualising the finished image as I’m taking the picture, I am finding the editing challenging; whether an image should be high key or low key is generally obvious to me as I seek to reproduce the emotional response that I felt as I took the picture, but that context is absent from the Tour photographs.

Many of the pictures also suffer from artefacts created by reflections from inside the train (hence, in part, the title of this blog). I’m not sure why these cause me concern; after all, I’m not making any secret of the fact that they were taken on a train and reflections are practically unavoidable. But they do. Overall, it does seem a long way from my photographic aspirations.

But I do like some of the photographs. The speed blur of the foreground against a sharp background often works well. The reflections can on occasion be interesting in themselves, as in the featured photograph for this blog. In the next week or two, I’ll publish a selection here and you can reach a view yourself.

In the end, did I enjoy the Grand Tour experience? The answer is definitely yes. Sitting for many hours on a train, alternating between looking at the scenery and reading may not be for everybody but for me it was everything I hoped it would be. I find watching the world go by with no personal effort required tremendously relaxing. And some of that scenery is world class; the coastal scenery in both Scotland and Devon, the Highland mountains, even some of the industrial landscapes of the Midlands are hugely impressive, no doubt helped by the generally good weather I enjoyed.

Would I do it again? No, once was enough. But there are other, equally interesting rail journeys that I might take one day…

The Grand Tour is living up to all my expectations. A reminder – in 72 hours, I am travelling mainly by train from my home in Coventry to Aberdeen in the north-east of Scotland (via London, Fort William and Kyle of Lochalsh), then on to Penzance in Cornwall before returning to Coventry. The total distance is almost 2,000 miles (3,200 km). I explained my rationale, such that it is, in my first blog about the Tour.

This morning I awoke as the sleeper train from London to Fort William was passing the Arrochar Alps, which lie at the southern edge of the Scottish Highlands. My initial encounter with the Highlands was with my best friend in our mid-teens on our first parent-free holiday. It was also the place that my wife and I came to on the first holiday after our marriage – a last minute, super bargain as we hadn’t thought we could afford any holiday that year. Perhaps for these reasons, of all the places I’ve visited the Highlands is undoubtedly my favourite.

So it was an enormous pleasure today as I zigzagged through the region, first west then north then back east. Some of the places I know well, others much less so; much of Rannoch Moor can only be reached by train or on foot and some of the coves that the train skirts as it leaves Kyle of Lochalsh are inaccessible by any other means. I love photographing in this part of the world as I find it so easy to find subjects that resonate with me in the manner I tried to explain in my first blog. Usually, though, I’m using a 35mm reflex camera on a tripod, each picture carefully composed. Today, I’ve been photographing with a compact camera from moving trains; composition has been as much a matter of luck as judgement. At the moment I’m by no means convinced that the experiment is working as well as I’d hoped but I’ll reserve final judgement until I return home and get to properly review the results.

The last leg of today’s journey – Inverness to Aberdeen – is another line I have never travelled on before. It remains, though, almost as unknown as previously; we were late leaving Inverness and pretty well the entire journey took place at night. Still, despite that meaning that my sleep is going to be shorter than I’d hoped, I remain excited by the prospect of tomorrow and the core journey of my Grand Tour, Aberdeen to Penzance. Oversleeping is definitely not an option!

In the 18th and 19th centuries, the Grand Tour was a rite of passage for wealthy young British men and latterly, with improving transport links, women. Lasting two years or more, a traveller might have lengthy stays in Paris, Geneva, Florence, Venice, Rome, Vienna and Munich. With sufficient time and money I would find it fascinating to make such a tour myself, but unfortunately I lack both.

I really enjoy travelling by train. I think that stems from my childhood when a train journey signalled something out of the ordinary – the start of a holiday or a visit to grandparents. A few years ago I happened upon the longest scheduled train journey in Britain; one direct service a day from  Aberdeen in the north-east of Scotland to Penzance in Cornwall, a distance approaching 800 miles (1,300 kilometres).

Over time, the idea grew that it ought to be possible to combine the concept of a Grand Tour with taking that train journey; after all, I have to get to Aberdeen to catch the train. Why not link together some iconic UK train journeys into a Grand Tour, albeit one that takes somewhat less than two years?

Today, the trip starts. In half an hour I leave Coventry for London. From London, I catch the overnight sleeper to Fort William. I then take a bus to Kyle of Lochalsh from where I head by train (travelling over the bit of line shown in the featured image) to Aberdeen, changing at Inverness. The following day is spent on the journey to Penzance, and after an overnight stop there I head back to Coventry. A 72-hour Grand Tour of England and Scotland!

I will of course be taking photographs on the journey. Whilst the editing must wait until I return, I intend to write a daily blog and will attach a featured image to each. I will also be tweeting about my progress (@glynephoto).